(Below) 19 July 1918 Frederick and Julia Elizabeth's Marriage Certificate.
This simply refers to the Parish Church of Portsea, but there are three Anglican churches in Portsea Parish: St Mary’s, St Wilfrid’s, and St Faith’s. It is not known which was the location of the ceremony, though St Wilfrid's seems a good bet as this was the name chosen for their first child. 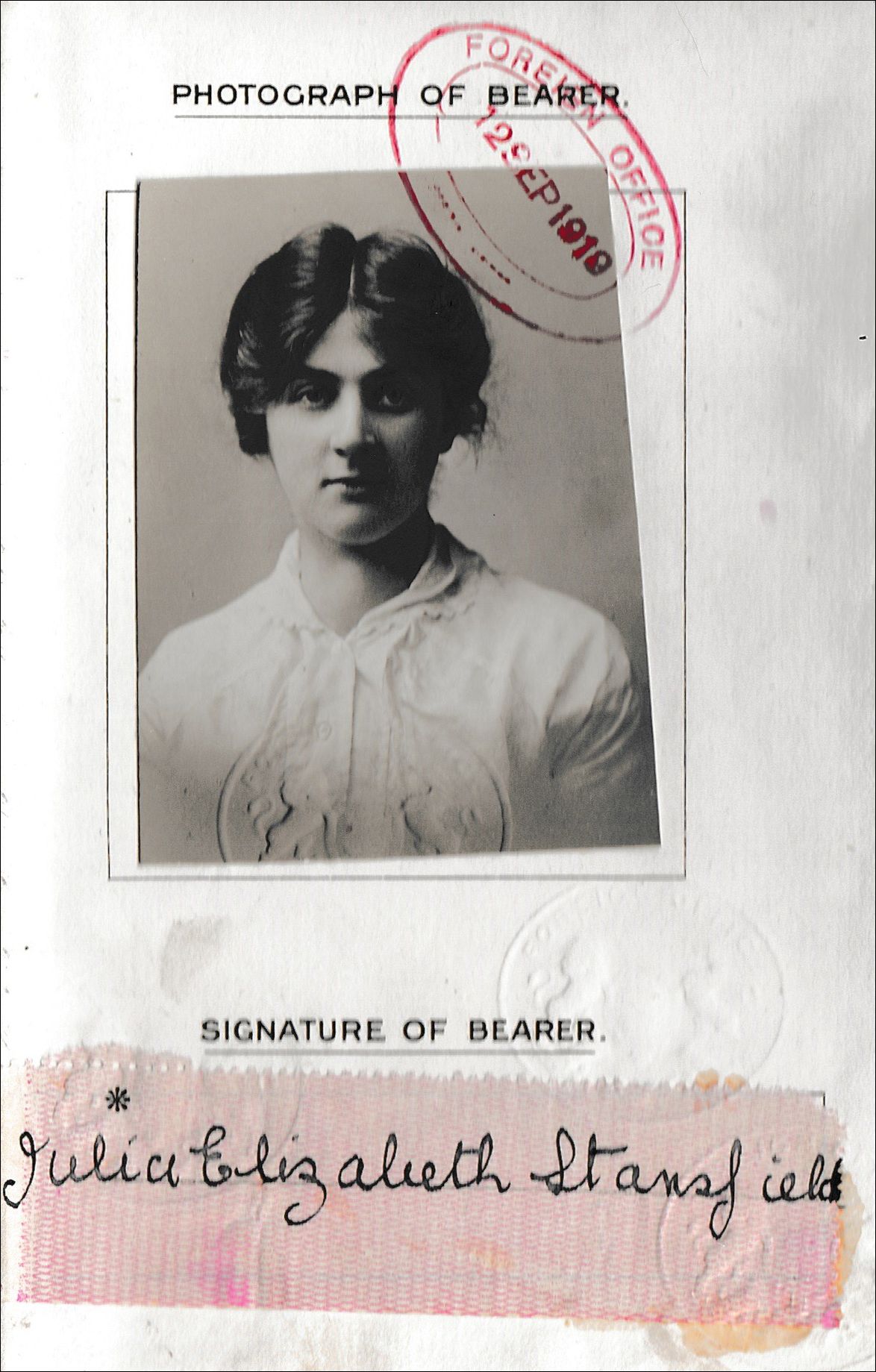 Foreign Office endorsement of Passport indicating intention to visit Gibraltar, presumably to meet up with Frederick on shore leave. 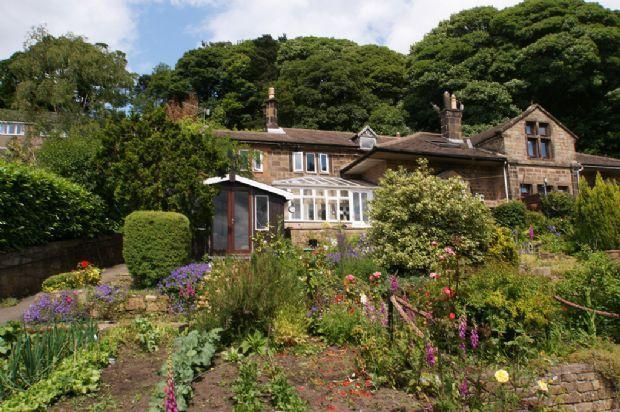 
(Right) Julia Elizabeth with Charlie (left) and Geoff (right) in the garden at "Ridgecot". 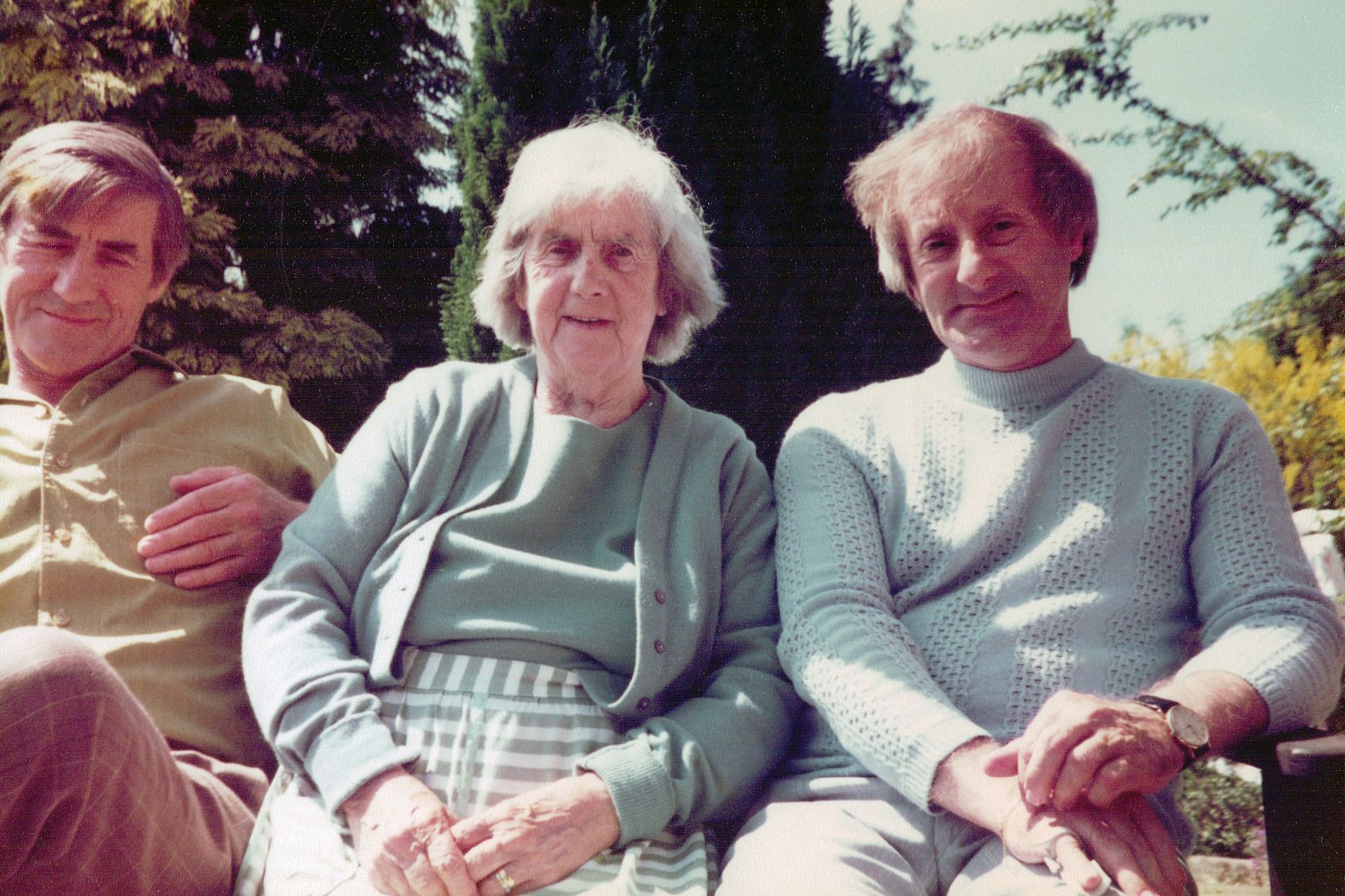 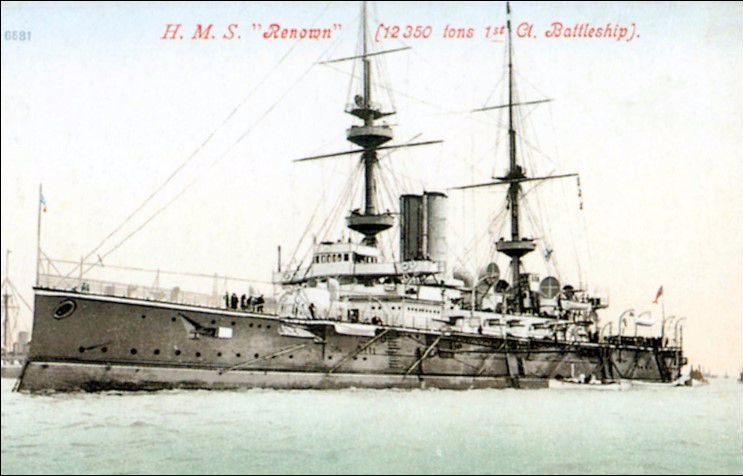 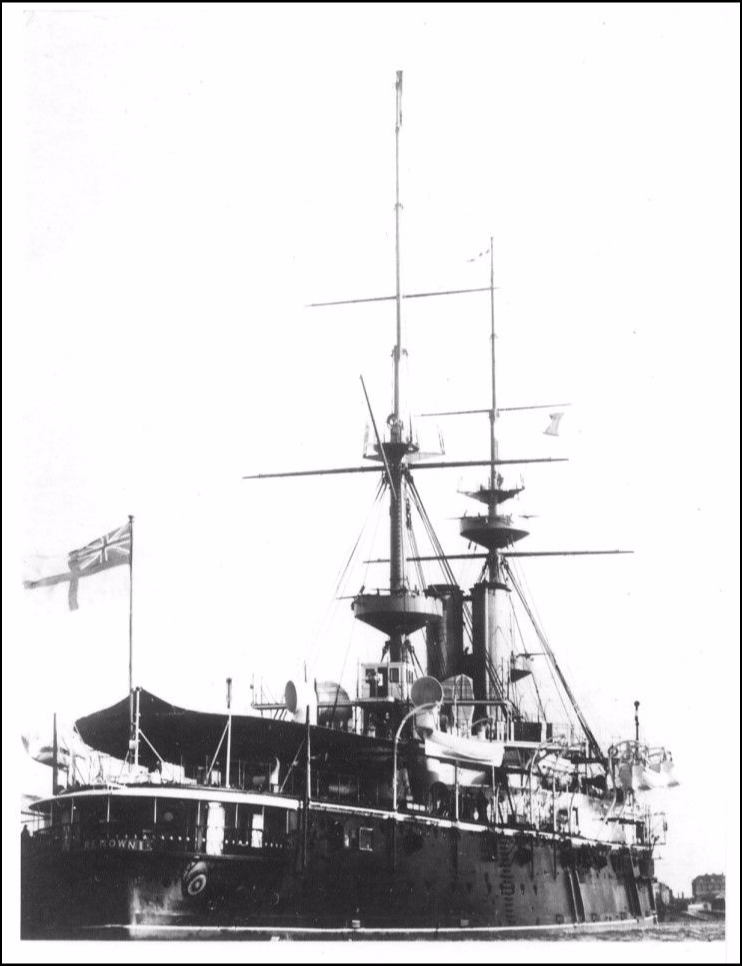 HMS Victory II 22 Jan 1911 to 14 Mar 1911, Stoker 2nd Class
HMS Hecla 15 Mar to ?, Stoker 2nd Class
HMS Hecla 13 Sep 1911 to 15 Jan 1912, Stoker 1st Class
This incarnation of the Hecla was a torpedo boat carrier/depot ship purchased in 1878, modernised in 1912, and sold in 1926.
HMS Venus 16 Jan 1912 to 11 Dec 1913. Passed educationally for Petty Officer 2 Sept 1913.
The Venus was an Eclipse-class protected cruiser built by Fairfield Shipbuilding & Engineering, built in 1895 and sold for scrap in 1921.
The Eclipse-class ships were 373 feet (113.7 m) long overall, had a beam of 53 feet 6 inches (16.31 m) and a draught of 20 feet 6 inches (6.2 m). They displaced 5,600 long tons (5,700 t) at normal load. To reduce biofouling, the hulls of the ships were sheathed with wood and copper. Their crew consisted of 450 officers and enlisted men.
During their sea trials, all of the lightly loaded ships exceeded their specifications and reached a top speed of 20 knots (37 kph; 23 mph). The ships carried five 40-calibre 6-inch guns protected by gun shields. One gun was mounted on the forecastle, two on the quarterdeck and one pair was abreast the bridge. The secondary armament consisted of six 40-calibre 4.7-inch guns, three on each side.
Defence against torpedo boats was provided by eight 12-pounder guns and six three-pounder Hotchkiss guns. Four of the 12-pounders were mounted in the sides of the hull fore and aft while the remaining four guns were interspersed between the 4.7-inch guns. The ships were also equipped with three 18-inch torpedo tubes, one submerged tube on each side and one above water in the stern. The ammunition supply consisted of 200 six-inch rounds per gun, 250 shells for each 4.7-inch gun, 300 rounds per gun for the 12-pounders and 500 for each three-pounder. Each ship also carried ten torpedoes, presumably four for each broadside tube and two for the stern tube.
(Below) HMS Venus
Between 1903 and 1905, all of the ships in the class except for HMS Eclipse had their mixed armament replaced with a more uniform armament of 11 six-inch, nine 12-pounders and seven 3-pounder guns.

HMS Woolwich 12 Dec 1913 to 19 Jan 1914, Stoker 1st Class
HMS Woolwich was a destroyer depot ship of 3,380 tons with a crew of 263, launched in 1912 and sold in 1926.
(Below) HMS Woolwich
HMS Hecla 20 Jan 1914 to 14 Jun 1914, Stoker 1st Class
HMS Victory II 10 Jul 1914 to 17 Jul 1914, Stoker 1st Class
HMS Zealandia 18 Jul 1914 to ?, Stoker 1st Class
HMS Zealandia 21 Sep 1916 to ?, Leading Stoker
HMS Zealandia 21 Mar 1917 to 19 Sept 1917, Leading Stoker
HMS New Zealand was a King Edward VII-class battleship of the Royal Navy. She was renamed HMS Zealandia in Dec 1911, the only Royal Navy ship to have carried this name. Built at Portsmouth 1903-1905 at a cost of £1,424,643 she was decommissioned 1917.
With a displacement of 16,350 tons she carried a crew of 777 and was armed with:
4 x 12in guns, 4 x 9.2in guns, 10 x 6in guns, 14 x 12-pounder guns, 14 x 3-pounder guns and 5 x torpedo tubes.
At the outbreak of World War I, the 3rd Battle Squadron including the Zealandia was assigned to the Grand Fleet and based at Rosyth, supplementing the Grand Fleet's cruisers on the Northern Patrol. During this duty, Zealandia rammed a German submarine on 10 September 1914. On 2 November 1914 the squadron was detached to reinforce the Channel Fleet and returned to Portland. It returned to the Grand Fleet on 13 November 1914. During sweeps by the fleet, she and her sister ships often steamed at the heads of divisions of the far more valuable dreadnoughts, where they could protect the dreadnoughts by watching for mines or by being the first to strike them.
(Below) HMS Zealandia at Portland in 1911 shortly after her name change.
On 6 November 1915 a division of the 3rd Battle Squadron consisting of battleships Hibernia (the flagship), Russell, Albemarle, and Zealandia was detached from the Grand Fleet to serve in the Dardanelles Campaign. Albemarle had to return for repairs after suffering severe damage on the first night of the outbound voyage, but the other three ships pressed on and arrived at the Dardanelles on 14 December 1915. In late January 1916 Zealandia and Hibernia left the eastern Mediterranean to return to the UK arriving at Portsmouth Dockyard on 6 February 1916. Zealandia underwent a refit there that lasted until March 1916 then rejoined the 3rd Battle Squadron and the Grand Fleet on 26 March 1916. 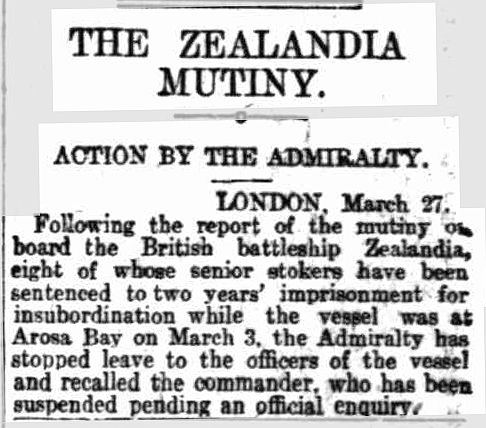 When Frederick was transferred to the Zealandia, she would have been in need of new stokers. On 3 Mar 1914 a number of the crew, including eight stokers, ‘mutinied’ and were subsequently court martialled and imprisoned. According to a document held by the National Archives the sentences were deemed “too severe and annulled owing to irregularities in proceedings of Court” – see “Making a mutinous assembly” ref ADM 116/1376 and the subsequent annulment ref ADM 156/77.