Parents: unknown
Potential candidates for Robert's father are explored on the webpage entitled The Missing Link, which can be found under the drop-down menu for Stansfield Roots.
Born: c1510-c1515
Flourished:
Died: c1559
Robert’s Will dated 10 Dec 1556 requested burial at St Peter’s, Felkirk. Probate was granted 10 April 1559.
Siblings: unknown
Robert’s Will refers to “my sister sonne John Gill”
Marriage:
- to (1) unknown
Buried at St Peter’s, Felkirk
- to (2) Alice
After Robert's death his widow, Alice, married John Robucke. Robert's second son George is mentioned in Robucke's Will.
Children
Robert
George
John
Margaret
Merrill
possibly Anne
Note: there is no mention of Anne in Robert's Will. However, she is referred to in Robert junior’s administration record dated 1617 as “Anne Grene wife [of] Robert Green sister………of the said deceased”.
Other facts
Felkirk Parish lies NE of Barnsley, with St Peter’s Church situated on the west side of South Hiendley. Close by the church lies the site of the deserted medieval village and former manor of Hodroyd.
Sources
- Will of Robert Stancefeyld written 10 Dec 1556 and Probate dated 10 Apr 1559
- Yorkshire Wills 1554-1568 Volume 15, Pt 3, f.326
- Will of John Robucke dated 1567
- Yorkshire, Extracted Parish Records
Evidence
Robert’s Will has been transcribed, as follows:
In the name of God Amen the 10th day of December In the year of our lord God AD 1556. I Robert Stancefeyld of the parishe of Felkirk ?baptised/?blessed of our lord God with sekness of body not withstanding of perfycte memorie doe maik this my last will and testament in maner followinge. First I commend my soule to almyghty god to the fellowshippe of the blessed virgin Mary and to all the sayints in heaven and my body to be buried in my parish church yard of saynte Peter of the saide Felkirk nighe to my ffirst wiffe. Item I bequest the lease and tacke* of my farmhold with income of my lands to Alice my wiffe soe longe as she kepe to her(?)my wife to the bringing upp of my five children Robert George John Margaret & Myriall [Meriall] and if itt doth please god that my said wiffe marrie agayne with an honest man that will be good to my said children I will then that the sayme man with my sayd wiffe occupie my sayd farmhold during my lease at the sight of my supervisor hereof that is Thomas R…day? my sister sonne John Gill and Johne Kempe willing them to desire(?) my lande lorde to be good to my children. Item, I will that Robert Jenkinson and Thomas Copley occupie my sayd farmhold tyll my said wyffe and children be able to occupie either all or the half thereof fulyllyng thier promise which they maid before John Heleley the elder that is that my wiffe & children should have all the farm house with an ?..ude of the ?layth [probably ‘laithe’ meaning agricultural building or barn] 6 acres of land tilled ?6 loades of haye 2 cows and ?...ssed the cariadge of all my necessary ?service within the lordshippe these which promises if they do nott kepe them I will that my said supervisor have ?theredo of my said farmhold as is aforesaid then I give the rest of all my goods my debts and ffuneralle discharged to my said wiffe Alice and my said children Robert George John Margaret and Merall whom I maike executors jointlye of this my said will. These witnesses by Thomas Garnett** clerk John Gill & John Kempe.
* Much like the modern lease, a Tack was a contract between an owner and a tenant, or “Tacksman”, granting the tenant possession of a parcel of land for a pre-stated period of years. The Tack fixed a yearly rent in cash or kind as well as a fixed term of expiry, and further determined whether or not the tenant could assign the land to a third party. This had to be explicitly allowed in Tacks shorter than nineteen years, but was permissible at the tenant’s discretion in long term Tacks.
** Thomas Garnett was Vicar of Felkirk from 6 Feb 1549 until his death in 1577. According to EW Crossley’s 'Halifax Wills', Sir Thomas Garnett, Vicar of Felkirk, was also Dean of Pontefract as at 25 Nov 1551. 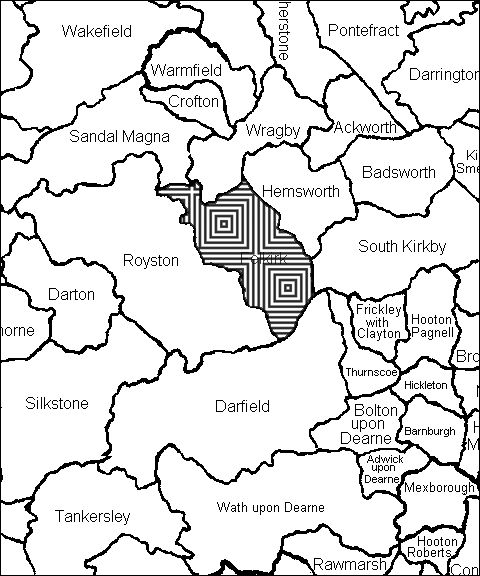 The parish of Felkirk is shown (left) as shaded, along with its neighbouring parishes. The extent to which early Parish Registers and Bishops' Transcripts are available varies enormously from one parish to another. Parish Registers had to be kept from 1538, but many have been lost, damaged or destroyed during the passage of time. From 1598 every parish also had to submit copies of the parish register to the Archdeacon or Bishop, these being known as the Bishops' Transcripts. Sometimes these contain extra information not in the parish register itself.

Robert may have moved to Felkirk at the time of the release of monastic lands following the Dissolution of the Monasteries by Henry VIII. Nostell Priory, just to the north of Felkirk, was dissolved in 1540 and Monk Bretton Priory, a short distance to the west, was closed down in November 1538. Both had extensive lands in the area. Alternatively, Robert and his forebears could have lived in Felkirk Parish for generations. Without further evidence, it is impossible to say, as parish records were only kept from 1538 onwards.
In the years following the Dissolution, lands and properties changed hands at an alarming rate as speculators sought to expand their power base and/or wealth. It must be remembered, though, that all lands were ultimately held by the reigning monarch and were granted to the major landholders who then sub-let them piecemeal. For example, in 1549 Sir Thomas Gargrave acquired the following:
Manor of Havercrofte & 24 messuages, 12 cottages, & a windmill with lands in the same & in Preston, Kynnesley, Hymmesworth, South Hendley, Cold Hendley, Ryle, Brereley, Derfeld, Hoytroyde, Ruston, Herdwyke, Felkyrk, Preston Jakelyn, Wakefeld, & Stanley.
In 1580 another huge transfer of property in the area is recorded, from Henry Hickforde, gent, & Robert Payne to Cottonius Gargrave, gent...1300 messuages, 1000 cottages, 10 watermills & 10 windmills in Stanley, Hemsworth, Havercroft, Ryhill, Badsworth, Hiendley, Ackworth.
The Manor of Havercroft was formed from the confiscated lands of Nostell Priory. Robert junior was living in Havercroft in 1604, but all we know is that Robert senior lived somewhere within Felkirk parish which would include Havercroft, Ryhill, South Hiendley, Brierley, Grimethorpe, and Shafton. Interestingly, Sir Thomas Gargrave’s property dealings invariably mention an associate named Thomas Darley who may have been the supervisor referred to in Robert’s Will.
My thanks to researcher Joanne Backhouse for her collaboration and guidance regarding the Stansfeld family and Calderdale.